I've been doing a lot of music writing recently

but I haven't been writing about it here. Mainly for Silent Radio and God is in the TV. The first one was published on the occasion of my 29th birthday, which feels like (is) a long time ago now, but what can you do? You can click on the links to read them all, that's what you can do.

Have a click through. If for some ridiculous reason you've only got time to read three of them, the best bits are to be found in the PABH, Vessels and Tramlines reviews. But you should really read them all, obviously.
Posted by Andy Vine at 14:40 No comments:

That's right, the debut Autoflag album, Doggerel, is very nearly here. We've spent this evening setting up the Bandcamp page and dubbing the tapes after work every night. It'll be a free download and a grand total of 13 cassettes will be available, old tapes that we've found and recorded over with the album. There's a dramatic reading of a couple of chapters of the Bible, the first Spice Girls album, a Smurfs tape, a lot of Christian pop, all sorts. They will cost £3 each and will of course include a free download, which is useful because it turns out some of these cassettes aren't as long as the Autoflag album. Never mind, it's all about the principle of the thing. Here's the cover art and tracklisting: 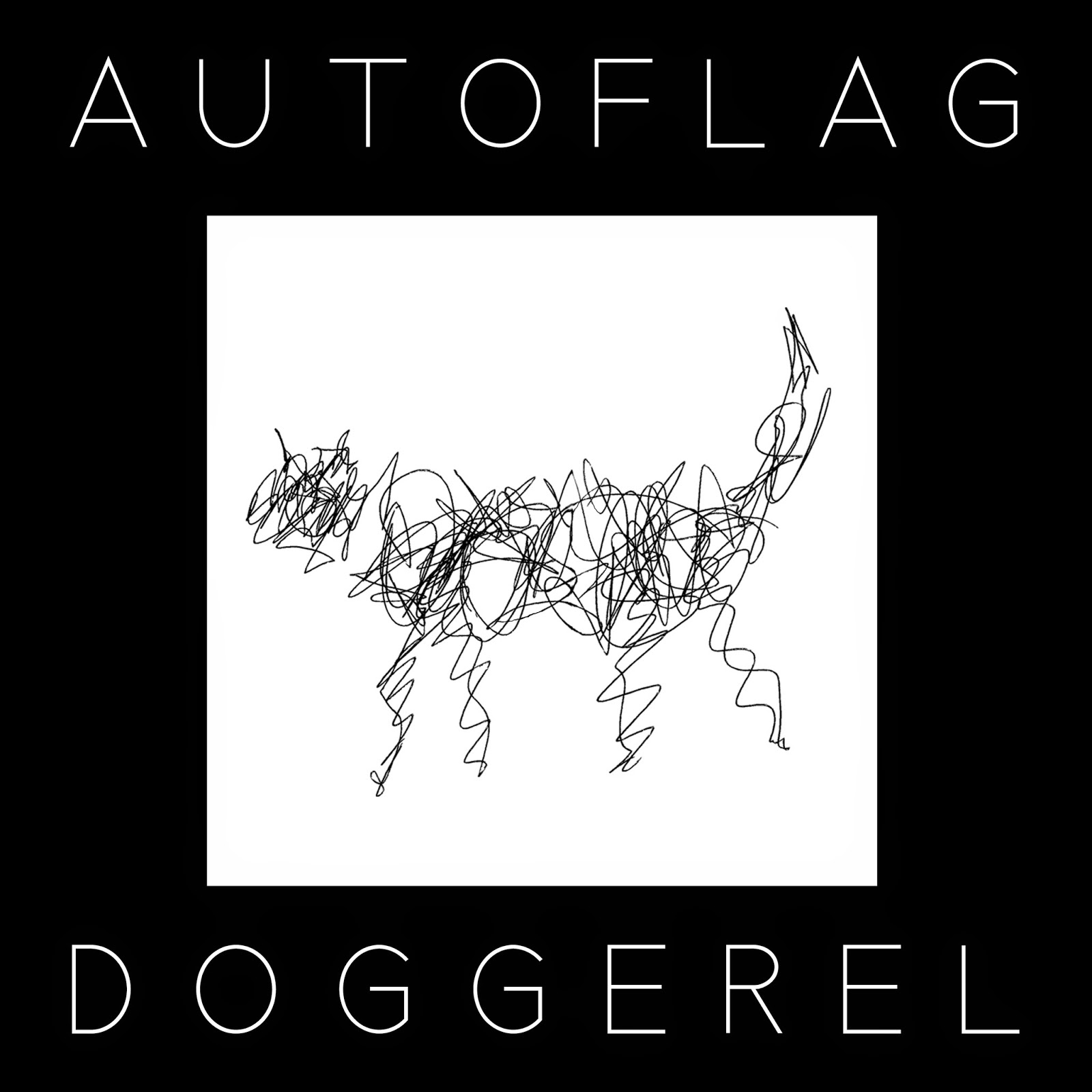 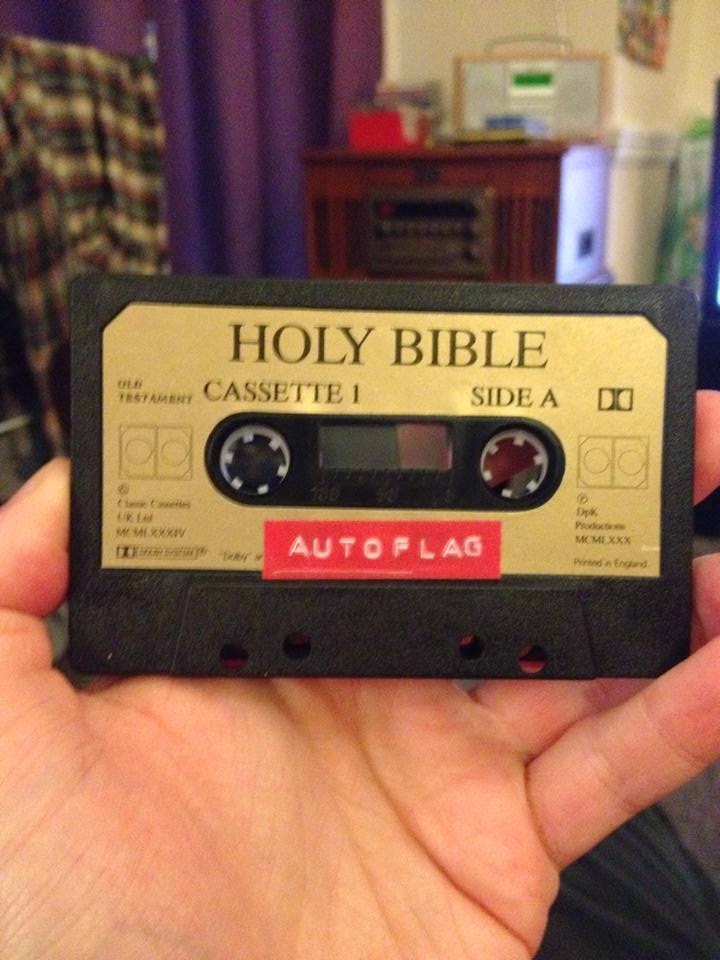 We don't have a release date for it yet, it depends on when the cassettes are all done. We're cooking up something special for the artwork for them as well. I wrote an article for Cultured Vultures about the label and the release, which has some little clues of what we've got in mind.

In the meantime, my review of Spiderland by Slint has gone up on Echoes and Dust, and I'm going to be doung some more reviews for Silent Radio soon. Exciting! Also I've rejigged an old poster for From The Kites Of San Quentin who are touring at the moment, check it out: 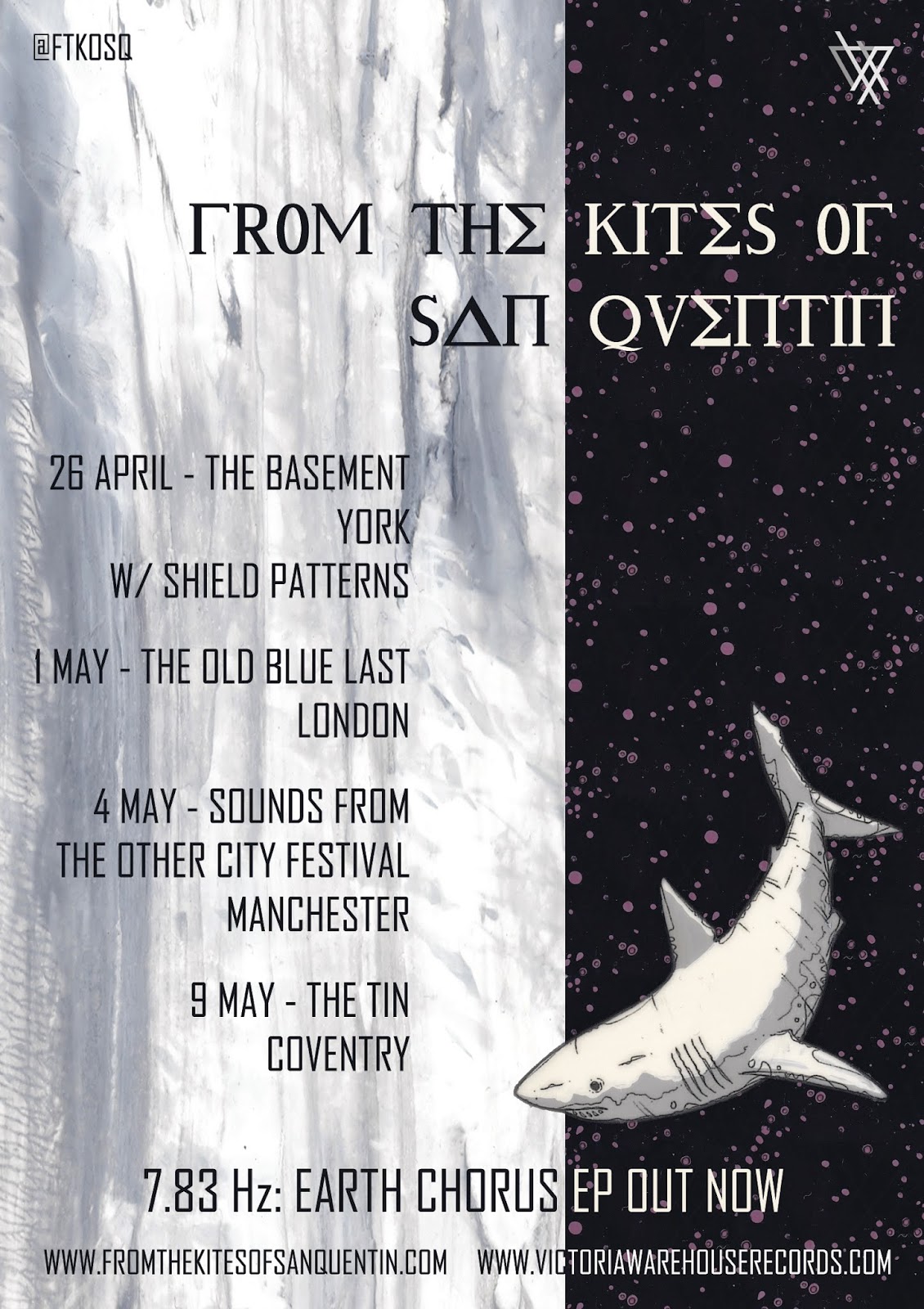 Yeah, you missed the York date. You're a terrible fan. Apparently the London date needed its own poster.

I think this is the most pop thing I've ever done. Kelly said she really likes it, she's been bugging me to upload it for like three weeks or something. I only just finished it this morning though. Don't worry, the next thing I'm working on is probably the least pop thing I've ever done. Absolute balance. Album details coming soon. This won't be on it...
Posted by Andy Vine at 12:10 No comments:

This post is mainly about music writing, OK, but there is one piece of admin first which I appear to have overlooked. The rather lovely folks at Salle Pierre Lamy have featured Police Academy Police Academy by Autoflag on their podcast. The podcast is kind of the most difficult thing to describe, suffice it to say that they last about 2 hrs but are well worth every minute of your time. Think of it as watching a film, but without pictures or a coherent narrative. They're pretty incredible. Anyway PAPA was on podcast 20 which came out in October (!) and there have been two more since, so sorry for the delay. The thing that reminded me is that they also used Jackson's Symphony No5 in SPLADIC 1. That stands for the Salle Pierre Lamy Audio Described Image Challenge and a number 1, because it's the first one they've done. Here it is.

Anyway, in other news I've been doing a bit of writing about some bits of music. This was all kicked off by taking part in the 1p Album Club's Christmas swap. The 1p Album Club is as straightforward and brilliant as the name suggests, the idea is to buy an album for a penny from Amazon and send it to someone else. They send one to you and you review them. Lovely. I received Ditherer by Fog in the post and you can read the words I wrote about it by clicking on these words that I've just written. I bought Welcome To The Monkey House by the Dandy Warhols but I don't know if it's got lost in the post or something but it hasn't been published yet, so I'll put the words I wrote about that at the end of this thing. Maybe I wrote too much, maybe that's it. I got a bit carried away but it was good fun.

Since then I've written about Spiderland by Slint in time for it's reissue for Echoes and Dust and I've written a piece about releasing the Autoflag album for Cultured Vultures which I am literally going to email as soon as I've finished writing this. These are both cracking little sites which I'll hopefully be doing some more stuff for so I highly recommend you go and get lost in them for a bit.

Without further ado, Welcome To The Monkey House.


The Dandy Warhols were surely destined to be a one hit wonder in the UK, known for That Song From The Vodafone Advert (Bohemian Like You) and a terrible name. Their previous album Thirteen Tales From Urban Bohemia was full of the same retro rock that everyone from the White Stripes to the Von Bondies were peddling at the time. So surely nobody expected their second album to be a snake-hipped mix of electro-indie and effortlessly sexy falsetto?

The minute long palm muted false start of a title track almost tricks the listener into expecting more of the same, but it soon makes way for lead single We Used To Be Friends' giddy synth squeaks and handclaps.

The Dope (Wonderful You) epitomises this new approach with it's funky synth loops and that falsetto vocal that sounds effortless to the point of lazy. I Am A Scientist is more of the same, insanely danceable and near nonsense drug referencing lyrics. I Am Over It is more mid-paced and guitar based, and brings to mind the first Gorillaz record. The Dandy Warhols Love Almost Everyone is throwaway filler, but at least it's sub-two minutes long. Insincere Because I on the other hand is a wispy dream pop ballad, so light and airy it's gone from the memory almost as soon as it's over. Second single You Were The Last High blows the previous two tracks out of the water though with the Prince funk riffs of the verse contrasting beautifully with its heart-swelling highlight of a chorus, matched on the record only We Used To Be Friends.

After such a high point the rest of the record inevitably drops off slightly in quality, but the anthemic shoegazey chorus of Heavenly makes up for the fairly forgettable verses. I Am Sound's wonky piano is so David Bowie that I've just spent the past 20 minutes going through his back catalogue trying to figure out which song I thought it was a sample from. Hit Rock Bottom is a similar glam tinged effort, with the vocoder-ed backing vocals recalling 20th Century Boys. It even contains the lyric "boys keep swinging", for crying out loud. The final track You Came In Burned is a confusing, almost ambient exercise, the comedown of the record.

I suppose they're now known as the band who aren't The Brian Jonestown Massacre in Dig! but this record is hugely underrated, predicting the trend of the last few years for endless parades of bands from Passion Pit to Chvrches being sold as the saviours of electro tinged indie. The Dandy Warhols could have been the godfathers of them all had they continued in this vein, but apparently they didn't like the record and self-released a different mix entitled The Dandy Warhols Are Sound six years later. If I'm being completely honest, the main reason I bought this for the swap was to justify having had We Used To Be Friends stuck in my head for the last few months. Relistening to the album hasn't helped dislodge it, only confirm that it's absolutely fucking brilliant.

Frances' Mother, Who Has No Tastebuds

Frances' Mother, Who Has No Tastebuds is the name of the new track by our very own Autoflag. It sounds like this:

At least I hope that worked, I've mentioned before that my browser is unsupported by Soundcloud nowadays which makes life a bit difficult.

This was made as a sort-of Valentines present. She loves the Great British Bake Off which is why it's jam packed with samples. I wasn't about to start singing, OK. We've got some plans for Autoflag as it goes, in an effort to clear the decks as it were we're planning on releasing an album of older tracks. Stuff that's I'm happy with but want to draw a line under. Mainly stuff from before the old hard drive on my laptop failed really, so it's stuff that only really exists now as mp3s and not the original files with the individual multitracks and stuff. This track won't be on it and neither will Ryan Goshawk, and everything will still be available on Soundcloud (for now at least) but we want something proper, with a Tracklisting and a Name and Artwork, not to mention something physical. Here at Dead Pheasant we like physical products, so we're brainstorming at the moment to come up with a decent idea. Whatever it is, the record will be available as a download as well. We're getting there anyway, I've got a name and a running order figured out so that's a starter isn't it, and now I've written it here I feel something of an obligation to make it happen. Wish me luck.

You may or may not have noticed, but there's been a bit of a rejig (take our word for it). The thing is, last year was very quiet for us here at Dead Pheasant Towers, and we weren't especially into it. Who knows why, but there was a distinct lack of inspiration. Part of the problem was a couple of things falling through but that's really not an excuse. Whatever, we'd like to change all that. There are Things In The Pipeline but for now that's all they are. First things first and all that, hence the makeover. Now we're smelling better and we've got our hurr did we're better positioned to do some better stuff, or that's the theory anyway.

There were four posts last year. We're hoping to do about that many a month in future. More of everything is what we're aiming for. Monthly previews of upcoming events, semi-regular guest blog posts, actual posts of our actual work, setting up a shop, maybe even (touch wood) some actual events that we ourselves put on. Wouldn't that be a fine thing? It would.

So yeah, it's possible that there will be a few more adjustments to the layout and stuff before we're completely happy with it (for starters we've got our best minds working on how to stop the author of each post mangling into the following text) but at least we're getting there, right?

Or, you know, not really, but the layout's being changed at the moment so if it looks weird, that's why.

Sorry. Normal service will be resumed ASAP. Or rather, better than normal service. You'll see.

Email ThisBlogThis!Share to TwitterShare to FacebookShare to Pinterest
Labels: Dead Pheasant
Older Posts Home
Subscribe to: Posts (Atom)
Not actually a pheasant that is dead.