This blog post finds me in a jubilant mood, eating a celebratory late night bacon butty and drinking a celebratory late night cup of tea (although the late night cup of tea is far from unusual) as I have just received an email informing me that the photograph Kelly Ward and I submitted for the From Pet Shops To Porn exhibition at Cord has been successful. It begins on Thursday night, the 12th of July and runs for 8 weeks. The following piece of filth is our submission, to be printed, framed and delivered to Cord by the seat of our collective pants tomorrow. 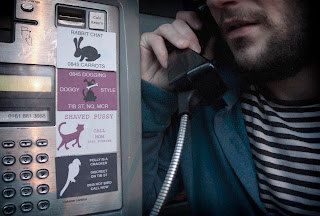 I'm pretty pleased with it to say the least. I can't take much of the credit, it was Kelly's idea. I designed the calling cards and she took the photo. Obviously that's my chin and hand as well. We're planning on using some of the other photos we took (along with some extras we're taking tomorrow) to put together a little zine. More information on that as and when we have it. In the meantime, come along on Thursday night and let's have a drink and glamorise/satirise bestiality together!
Posted by Andy Vine at 22:30 2 comments: