OK so first things first, this blog post has a soundtrack. Not an especially good one, I'll be the first to admit, but this is some old stuff I found on a hard drive which is quite different to the sort of thing I make now but doesn't deserve to be destined to be forgotten on a bookshelf somewhere in Chorlton. The first few tracks are from a brief period where I was really into the idea of making something using just samples that sounded like a live band, complete with tuning up and horrible feedback solos and stuff. After that I started experimenting a bit more, and the more Autoflag sound starts coming together, and then there's Police Academy Police Academy, which is arguably both the best and worst thing I've ever made. It was put together from some stolen audio that a couple of my housemates recorded at university. It's almost free jazz, but also completely not of course. Don't miss the dramatic ending, it's bloody heartbreaking.


I hope that worked, I can't tell as my browser is old and rubbish and unsupported by Soundcloud nowadays, oh dear. Anyway, back to more important matters.

Kites are releasing an EP of course, it's called 7.83 Hz: Earth Chorus and I've heard it and it's dead good. They're running a competition where you can win two copies of the EP/DVD, a hotel room and two guestlist spots for a Victoria Warehouse Records event, and, most excitingly, two tickets to see the band at Soundwave Festival in Croatia. OMG. All you have to do is like and share the thing I made on Facebook. This is it underneath, but you need to click on these words to see the thing properly OK. 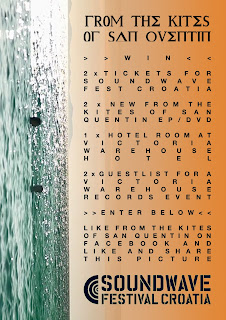 Also, This City Is Ours and Mind On Fire are putting on another gig. This one's for Flako at Islington Mill on the 12th of July. The artwork is stolen from the new Flako EP, I think it's pretty great. 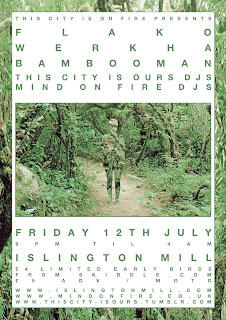 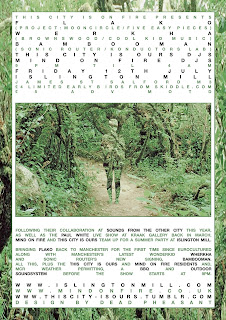 In other, slightly less immediate news, the poster and sticker things I've done for the aforementioned Kites EP have been done so I'll post them once the band have decided it's time for them to be shown off. Fair's fair. I've also been asked to design some greetings cards for a new company which is pretty cool and not really something that I've done before so that should be fun.