I am so crap at this

I'm sorry, I know every time I say I WILL UPDATE MORE OFTEN and then just don't but you're just going to have to stop relying on me updating aren't you?

What have I done since last time? Well there was the March This City Is Ours, which looked like this: 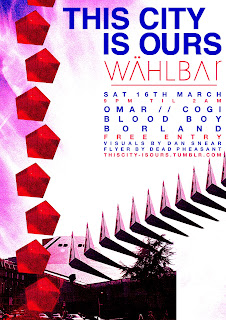 This City Is Ours and Mind On Fire put on Paul White at Kraak. I did two posters for this, one with loads of words on and a more practical, streamlined version. I don't know who did the picture of the little fella, sorry, I believe it's from one of Paul White's records though. 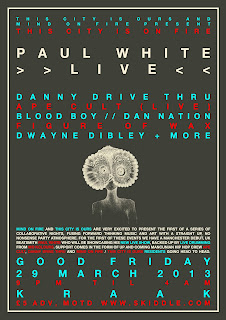 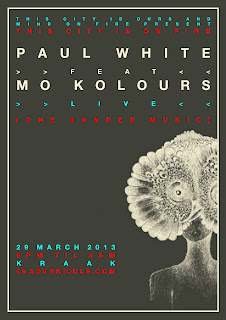 And then the April This City Is Ours, which served as the album launch for Cogi's Time O'Clock, which is a dead good record, kind of ambient electronica but not totally, and you can get it by clicking on these words here. The artwork here is from the Cogi album sleeve, it's by Paul Hallows who is dead good. 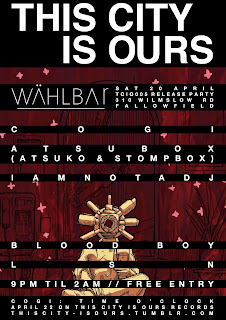 In the meantime I've been doing some stuff for the next Kites EP (a sticker and a poster) and I'll upload those here as soon as they're finished and stuff. That's it for now. See, it hasn't even taken me long to do this, I don't know why I don't bother. OH WELL
Posted by Andy Vine at 14:23 No comments:

Email ThisBlogThis!Share to TwitterShare to FacebookShare to Pinterest
Labels: Andy Vine, Cogi, himHallows, Mind On Fire, Paul White, poster, This City Is Ours
Newer Posts Older Posts Home
Subscribe to: Posts (Atom)
Not actually a pheasant that is dead.