Pay attention, this is important and I'm tired.

Next weekend the second Carefully Planned festival takes over Manchester. Six venues, including 2022NQ, where an exhibtion will be simultaneously taking place which I have been helping out to curate. The brains behind the outfit is the lovely Amy Tidmarsh who has done all the posters and stuff for Carefully Planned. She's got mad skillz so it's going to be great. Like really, really great. Come along.

I've also done a drawing for Hayley Flynn of Skyliner fame for a theatre company called Northern Spirit's project A Wondrous Place. It's a pretty nice idea about creating a theatre show based around contributions from bloggers from northern cities, namely Manchester, Liverpool, Sheffield and Tyne and Wear. Keep your eyes peeled for my small contribution anyway, this week is her week to take over their website. Hopefully very soon we can announce some more exciting stuff to do with them too.

And last but by no means least, the back cover for the Haiku Salut/Hopeless Local Marching Band split single on Wild Combination Recordings is done and looks like this: 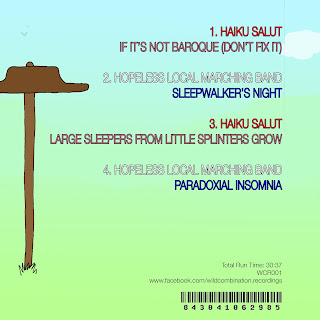 It comes out on the 2nd of November and they're having a party in Nottingham for it. Top one.

Oh, and I know this post is basically just a load of links but there's not one here that doesn't warrant clicking on, not one.
Posted by Andy Vine at 22:18 No comments: