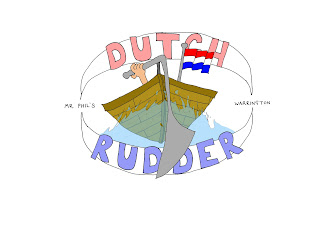 A label for Mr Phil's Dutch Rudder. I did this quite a while ago now but have only just realised I haven't posted it here so, ta-dah! Dutch Rudder is much nicer than Wizard's Sleeve, FYI. 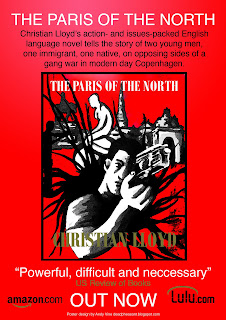 A poster for a book called The Paris of the North, by Christian Lloyd. I didn't design the cover, so I didn't have a massive amount of flexibility, so I just tried to work with the colour scheme I already had. It was published in the Copenhagen Post, which is nice. It's a good read as well, so go and buy it. I recommend reading it on the train on your way home from work, but not on the way there, just read the paper and listen to music on the way there. This is what I do.
If I Was A Bhangra DJ I Would Call Myself Bombay Mix(tape) by Autoflag
This is a new mixtape I made. I actually made it in the hope that I could play it between bands when I put a gig on (which I was meant to be doing) but it fell through for one reason or another (the venue closed down). Anyway, if you've got a spare 80 mins and you want to find out how I mixed Shapes into James Blake (answer: excellently) then push the down arrow on the player and you'll be able to download it for free. It's the best mixtape I've made, I think, and I'm going to make them more often from now on.
As well as these things, I have been doing some serious work on my film. I've completely written the treatment for it to a standard that I'm pretty happy with, which means that after a meeting in the pub with some red pens which will probably end with me doing a final draft, I'll be getting to work on a script fairly soon. I will need many an extra. Volunteers should apply within. Must not be afraid of wearing heavy makeup, including fake blood.
Posted by Andy Vine at 20:46