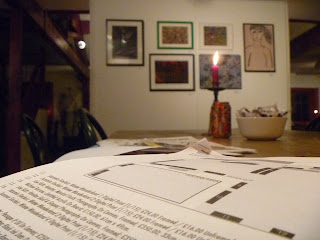 Been a long time since I have posted anything for DP so I'm kicking off with one of the latest art shows that I took part it. The show was at The Egg Cafe gallery in Liverpool. For this show I submitted two pieces that I did during the summer before. I thought i would dive in to the world of abstract art. I wanted to create a visual piece with out using a brush. 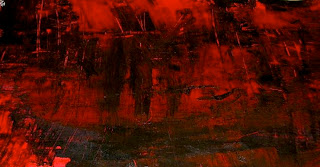 I would get the paper or the canvas I was using and spread layers of paint on them. I would take a screen printing swiper and swipe layers of paint away. I would use acrylic paints but I would also make my own medium of paint by watering down liquid latex and then add certain inks and tea. I came out with some amazing colours.
The show it self went really well. There was a big turn out and a lot of people to speak to. This was the first show that I attended by myself and not know any one. The two pieces were Matterhorn's Campfire (image above) and Largeman's abyss (Image below). Named after a book and a film.
I wrote what happened on my tumblr at the show : -
Last Thursday (24th November) was the opening night for the Winter blues art show. Tho this would of been the 4th art show I would of been in this year, it’ll be the first one that I would of bothered to attended to. Not that the other shows where not worth going to, I just had other things on the nights that they were opening on. So with this in mind I sent out the word about the show and tried to form a band of people to go with. But it seems they where all busy or they did the cool kid Hollywood thing of “get your people to call my people.” Bunch of phonies getting worse each day. Determined to go I set out in to the windy night armed with a copy of George Orwell’s Nineteen Eighty-Four.

Hoped on the Liverpool train. Normally this ride is full of noisy people or theres at least one drunk. Tonight tho it was like a ghost train. No one in my carriage. Gave me time tho to start my book.

I arrived at the show a bit late. 15 Minutes, my thought was I don’t want to get there on the dot and no one else be there. Out side the building there was a couple smoking. “Well at least people turned up” I said in my head. Nothing worse then no one to turn up to a show that your part off. Climbed the spiral stair case the top floor where the show was taking part. I open the door and walk through.

I was greeted with a room full of people. Bit of a mixture of panic and excitement. What caught my eye tho was a woman pointing at a wall of paintings and been in a bit of a state. To make her worse she dropped her Iphone and cracked the glass screen. I seated myself a couple of tables down and sat in the middle of one of the big tables. Thought this way I could here what was going on with the woman but also I could over hear what other people thought about the show. After ordering some food and get a cup of tea in I came back to my seat and opened my book up again. But the woman was still going on. After doing a bit of ease dropping I over heard why she was going on to her husband. She was another artist taking part in the show. She had a problem with that her paintings had been split up on the wall which they were displayed on. Another painting had been put up in-between hers. I looked up and staring at the painting that had split hers up. It was one of mine. This actually made my night. Not that I’m a bad person… well I hope that I don’t come across as one but I thought “At least one of my paintings has made a impression on some one, good or bad I’ll take it.” At this point I was smirking away.

Food came and I was trying to do the hipster look of reading a old school sci-fi book whilst eating food and not giving a dam what other people thought of me. In my head I pulled it off. Finishing my food I had a walk around to see the other pieces of art in the show. I tend to get to be a critical bastard when it comes to other peoples art work. If it doesn’t interest me at all I’ll over look it or just think nothing of it. I guess thats a bastard thing to do and not in the spirit of things but what can you do? Some one who I did like was a piece by Hazel Mutch. She had painted blades of grass with inks. Impressed that she had used inks to a great effect. I have tried in the past countless times to use ink in my work. I just can’t seem to get blends right. So kudos to you I thought.

I never know how much to price my art work. With me still been a struggling artist still trying to make a name for myself you can’t really charge much for your paintings. If the painting is good enough people will pay. Well that’s what I’m told. Having a look around there was prints of peoples work. Nothing wrong with this but I always think you could put the original up for show but then have a note to say “prints on sale not original”. The prices that these people wanted tho was going in to the £££. So ridiculous to think your going to get that money for a print at a small art show. My paintings are only going for £50/60 each. I have only paid £95 for a Sam Flores print once, who is a well known artist in L.A. All other prints were around £40-60, but it’s there call on the price.

I returned to my seat and ordered another pot of tea. After sitting of for a while I over heard a woman say “Zephyrbaby thats a fancy name.” I tend not to say who I am when people mention me. I like to see what they say about me not knowing who I was. It seems for this show people enjoyed one of my paintings more then the other. I only entered two for this show. Largeman’s Abyss and Matterhorn Campfire. Largeman’s Abyss was named after the film “Garden state”. While Matterhorn Campfire was named after a chapter in the book “Dharma Bums” by Jack Kerouac. Matterhorn Campfire was the one pulling in the most people. I decided to get up and hover around it. There was other paintings near it so I decided to have a close look at them. What I could hear people liked the colours used and how it seemed to be painted (it was put in the description that i hadn’t used a brush and i guess people were trying to guess what i had used instead). I went over to the organisers of the show to have a chat. They said that my painting has got some good comments about it. I was pleased with this.. well who wouldn’t.

I finished off my cup of tea and decided to call it a night. Pretty successful I thought. Good comments and good food. Got the train back then called a taxi at the station for home. By this time the heavens had opened up and the walk home didn’t look to inviting. 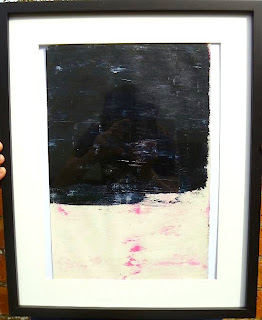